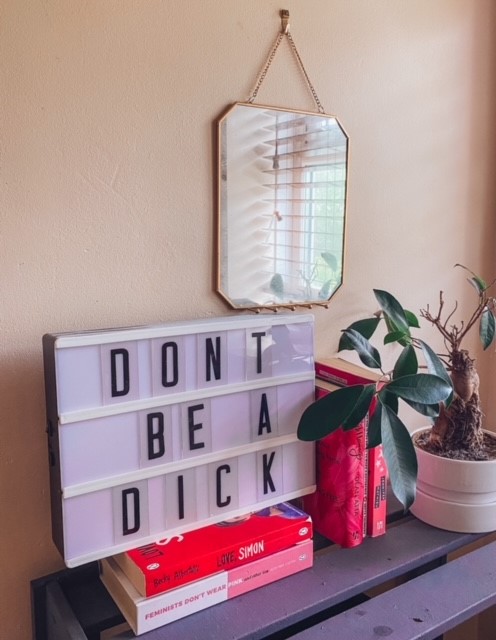 Posted at 19:29h in Blog by Nicki Smalley 0 Comments

I am not sure exactly what has happened lately. I don’t know if because half of my face is covered by a mask you can only see my resting Bitch eyes or maybe when I hear myself say “Hello, Please, thank you, How can I help?” what comes out of my mouth is actually “Alright Dickhead, you want my help or what?” but lately there has been an increase of me being shouted out.

All of them have been older males.

Please do not think I am about to go on a massive man hating rant. Anyone that truly knows me knows I love men, I adore men, I cannot get enough of men. I also think men need more support in lots of areas. I also would be writing this if i had the exact same experience from women after all, I am a feminist and feminism means equality. You cannot be a feminist if you man-hate because that’s not equality.

Yet, I cannot ignore this.

I got called a bitch by a guy at Tesco the other day because I had the audacity to choose a self-scanner till that glitched and therefore required the lady to help me. Right at the same time as this gentleman’s till decided to need assistance. He was not pleased that she chose to help me first. He was not pleased that she wheeled my trolley into the express till area to scan the self-scanner on that till. He was very unhappy that the whole process took a minute. He yelled at her. He yelled at her so much that when he walked off and I asked if she was okay after hanging back that there were tears in her eyes and she said I get this all the time lately. As I walked to my car, I passed him loading his things into his boot and he said bitch loudly enough for me to hear but quietly enough to pretend he did not say it when I said, “Excuse me?” So yeah, gaslighting too.

I am a great believer in “Be Kind” No one can be kind all the time, I get that. That is too much pressure for anyone to carry. This guy could have been having a super bad day, everyone is capable of a tiny thing pushing them over the edge and reacting to something out of character to them but I know that If I have ever lost my shit over something, I ugly cry, shout and then apologise profusely therefore letting that person know that I have had a super bad day and get about two weeks of anxiety shits because I can’t stop replaying it in my mind. He did not give a single fuck that he had made two women upset to the verge of tears. i know this because i told him she was on the verge of tears yet he carried on shouting in my face. The fact that I have not shaken this off and it has been three weeks should explain how much this stays with us.

Since then, I do not know if some sort of weird abuse baton got passed to me after I comforted the woman but right now, I am getting shouted at almost every single day by a man. One guy even aggressively approached me over my parking. I parked in a space, saw a sticker on the back of his van that said it needed space to drop down the ramp and seeing him load it I reversed some more to give him space. Knowing I had plenty of space behind me I was just looking at the van to take that into consideration. I moved back a bit too far which meant that another car may not be able to park behind me. Absolutely fine, an error a lack of parking judgement on my behalf. i hold my dainty hands up that I was taking up a bit too much space. I did not notice as I was in a rush to get to work and taking the van into consideration. Instead of speaking nicely or even in a jokey manner he just started saying a lot of fucks calling me an idiot sick of people who cannot fucking drive properly taking the piss. I’m pretty sure some men reading this will have mentally thought “women drivers” because he obviously did.

Even got shouted out down the phone in work calling me incompetent for something that happened whilst I was on my holiday break and had a man make a complaint about me to another colleague whilst I was right there, even though when he spoke to me the day before he said nothing to my face.

It has made me question what is going on with our men? This increased level of rage is not good and we need to figure out where it is coming from. I get this past year has been a bit of a shitter but come on lads, manners cost nothing. I am forever optimistic that it is a small group of men causing problems, whilst the hashtag not all men filled me with femme rage (we obviously know not all men we should not have to say it) I have seen an increase in angry men but being angry of unnecessary things.

If these men that I had encountered could hand on heart say that they would have reacted the exact same way if it were another male that had done these things then cool, but I know they would not.

Instead of being shouty, take a breath and think “If my Mother/ Wife/ Sister/ Daughter could see me behaving this way, would she proud?”

Just do what I do, say what you need to say but be nice with it. Get your point across but in a calm, levelled manner then call me a dick under your breath as you walk off and have a whinge to someone about it later. There is no need for chest-puffing aggression. No one gets upset, no one thinks about it for weeks and no one would have to write a blog calling you out and explaining why you should not shout at women over stupid, pointless shit.

Or maybe you could just calm down and smile more.