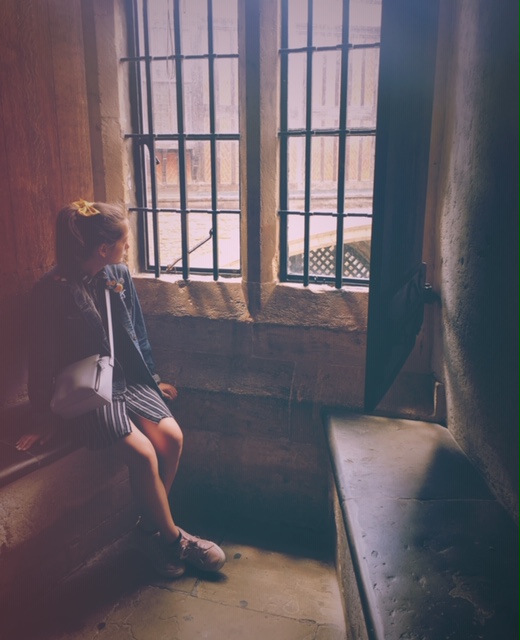 It has been a while since I was a teenager, and, in a few months, I will be the mother of one which is both terrifying and awesome in equal measure.

Considering I didn’t want to have children, Skylar is the best present I have ever had. I don’t have a lot of confidence in myself, but I have made the most incredible children. Whilst Sydney shines brightly in people’s faces by being the funny extrovert that she is, Skylar softly glows in the corner of the room providing the warmth and light that you didn’t even realise you needed.

I am in absolute awe of her. I watch her every day becoming this incredible human and I just swell with pride, but Skylar doesn’t have it easy.
If she is comfortable in your presence you get Skylar. Her dry sense of humour, her big fat heart pumping out all the beautiful love she has to offer. I know every parent says their kid is special, but Sky is a very special treasure.

One thing I love so much about her is her sensitivity. Being so consumed with feels herself that when faced with other people having feels she is the best person to have around. There have been times when I have needed a big cry for whatever reason and she has cuddled me and stroked my hair whilst I make a wet patch on her knee just like I have done with her. Her kindness and desire to help and mother people never fails to amaze me.

Her sensitivity is also the thing she struggles with the most.

Her last year of Primary school was tough. She was bullied by a girl and a few boys which resulted in a physical altercation from one of the boys. What should have been the best year of her primary time became her worst. At first it began with a bit of teasing but as soon as they saw how easy it was to upset her it was constant because to 10-year-old boys making a girl cry is hilarious. It just became relentless. Sky found solace in peer supporting (when older children play with the infant children at break times) and looking after the library (Hermione Granger is her idol). In her leavers’ assembly I was sad that she was moving high school but so relieved that she would be leaving and be able to move on from the people that were upsetting her. They started handing out award’s best sports person, most creative writing etc and then they started talking about the very special award called the citizen award. They were describing how this award is handed to someone who is kind and caring and has impressed the teachers with their personality throughout their entire time at primary and then they called out Skylar’s name. Remember when Rylan found out he had a place in the X factor? – That was me. I can’t ever find the words for that feeling it was beyond love and beyond pride. I had raised a lovely human. It was a giant middle finger to all those people that judged me when I found out I was pregnant at 21.

She trotted off to high school on a wave of sass and then became completely and utterly overwhelmed. My 12-year-old is now having panic attacks from the pressure. I am pretty sure that we didn’t have as much homework as they seem to have now. Most evenings Sky sits in her room straight from school and is up there for hours finishing her homework. On some evenings when you add the hours of school to the hours of homework, she has done a 12-hour day.

12-hour days are hard for an adult, so I don’t understand how that can be a positive for a child. In a few weeks they will be making their choices for GCSE’s as they have decided to spread it out over three years rather than two. I can see the pros to this, but they are telling 12-year olds that they need to make decisions about what they want to do for the rest of their lives. The choices they make impact the rest of their educational journey. They need to know what subjects they need to take for the types of careers they want to have. This is great for those small percentages of children that know what they want to do but for the rest, this is too much. I am 34 I still don’t know what I want to do with my life other than live it.

Sky lives in constant fear of not performing well enough and being downgraded if her work isn’t up to scratch. In her anxiety she then loses control of her emotions and she gets unbelievably overwhelmed. It is quite hard to deal with a child that is literally uncontrollably sobbing over the smallest of things because of the sheer pressure she feels. Coupling that with people telling her to suck it up and to stop being so sensitive it just exacerbates the problem. Watching your child not being able to breathe with skin as hot as fire because she had to re-do her German homework yet hadn’t been given proper explanatory notes just big red marks all over her previous work is horrendous. Sky wouldn’t even email her teacher to ask for help because she was too worried about her teacher shouting at her for not being capable.

I feel for teachers because I know they are under more pressure too. In no way am I blaming them at all for this. Teaching – I can imagine – is one of the most frustrating, tasking jobs with the biggest reward that anyone can experience and I know that, like every job, they will have guidelines and targets to hit. Every sector has become different. Even the workload in my job has increased tenfold since I started years ago. The demand on us all is getting beyond a joke.

I am unsure if this is the case around every high school, but Sky’s high school’s work is done mostly on an iPad. Again, I see the pros to this ie not having to carry around all the text books which I think has caused pretty much everyone to have spinal injuries is a great thing. Yet, constant screen time is not a good idea.

Am I now considered old fashioned because I don’t see what is so wrong with pen and paper?

For Christmas, Sky asked Santa to take her anxiety away. Whether she believes in him or not she has something inside her that she does not like to feel, and she wants someone to magic it away. Just let that sink in a bit.

We cannot let the next generation be like this. The pressure is building everywhere and soon its just going to implode. Mental health has been spoken about more and more lately but that’s because it is becoming so incredibly common. I have bought my daughter magazines – which I am so glad that they exist – called Teen Breathe. A magazine dedicated to helping teenagers with techniques to curb anxiety. Tips on how to decipher worrying thoughts. Exercises to help lift your depressive moods. This cannot be okay.

What can we do to lessen this huge weight that our children seem to now be dragging around? The teen years are so precarious as it is with their hormonal rollercoaster, surely, we should be trying to get them to surf gentle waves rather than risk them drowning in a tsunami of statistical goals. Teachers need our support and I actually think Sky would be the most incredible teacher when she is older but right now, I am a mum. My loyalities and heart lie in my role as a parent and this shit just ain’t flying with me.

Some of you may not agree but I told Sky that she just must try her best and if she gets 100% brilliant, if she gets 10% but feels like she tried her utmost, then brilliant. If she gets detention because she has failed to hand in her homework, big whoop. Family time is more important than an extra few sentences.

I am not willing to put my daughter’s mental state at risk. What I want my daughter to be in life is happy, well-rounded and kind. I want her to see the world, I want her to forge friendships and have relationships. I want her to make an awesome Roast dinner. I want her to go outside and get down with Mother Nature. I do not want her sat in my dining room with her sister screaming “Is she going to die?” because she cannot breathe properly over a piece of unimportant homework.

My girl is too precious to lose her to this.