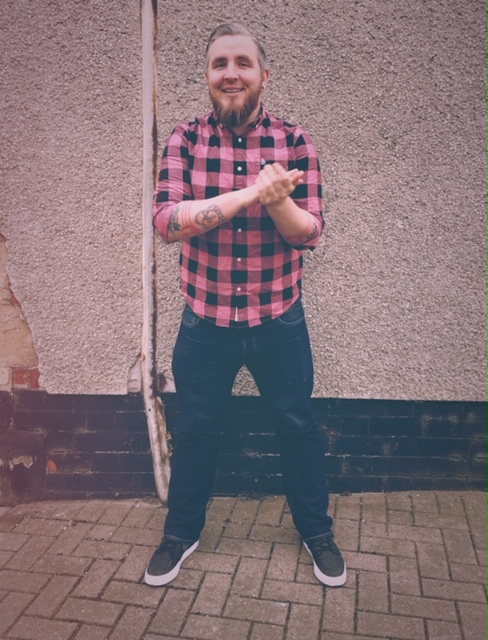 If you lived near Cardiff and you were alternative there was only one place you wanted to go on a night out. Down a side alley hid a basement club that was slick with grime and piss leak stains from the men’s toilets. The air was thick with swirls of smoke. The cheap booze of 99p double and a mixer gave you the worst death-like hangovers you would ever experience but it was home for the weird and wonderful. We congregated there in our hordes jumping round to the heavy guitar riffs and loud drum beats safe in our collective outcastness.

It was there that I first met Mike – who DJ’d there. Everyone wanted to be friends with Mike. I had never met someone who was a massive geek but completely owned his status and didn’t suffer with social awkwardness whenever an opposite sex member spoke to him.
Mike’s lust for happiness is contagious. Although he is a friend who means a great deal to me, we don’t hang out a huge amount so whenever we did see each other it was always a pleasure and always fun.

When Mike reached out to me and said he wanted to be part of my ‘Let’s hear it for the Boys’ project I was shocked because I couldn’t fathom he may have a problem in some way. That is the whole point of this project though 1. To get men to talk 2. To prove that no-one is untouchable from life’s sucky lemons.

We met in his cool office for a chat, I forgot to record anything, so this is all from memory and me sending frantic questions to double check my facts but here is Mike’s story.

“A few years back I went to my mate Trev’s house one night. Nothing special or particular happened. It was just another night of a bunch of guys hanging out watching wrestling videos and talking about my impending trip over to America to watch the Royal Rumble.”

Mike is a huge wrestling fan I think that’s why I liked him so much because he reminded me of my brother. The only time my brother and I got on when we were little was when we used to play WWF together, I was usually the Ultimate Warrior and, on very special occasions, Bret The Hitman Hart.
Mike flew to the US had the time of his life came home and faced one of the hardest things anyone can go through. Whilst he was away Trev had taken his own life.

“He was not the guy that would do this. If you lined up a bunch of guys and had to point someone out who may be suicidal, it wasn’t him. He was a life and soul of the party kinda guy”

We didn’t delve into the reasons or logistics of Trev’s suicide; the technicalities don’t matter.

“In the months that followed I lived in a haze and one night whilst mindlessly scrolling online I saw an advert for the London Triathlon and pressed the apply button. Never done a triathlon in my fucking life.”

From an outside perspective, Mike is fit as hell. I have admired – also found it hard to comprehend – his determination to go on this incredible fitness journey. Watching him post about the endless triathlons, marathons and iron-mans was incredible but listening him talk about them and his reasonings it is clear that Mike is in a constant internal struggle.

“It has been interesting to meet the elite competitors kitted up in the expensive gear, mocking the people that don’t have the right shit and giving themselves ridiculous goals just to look good in front of their other rich friends. These guys are racing to look good I am racing because I want to push myself. I take pride in looking like an absolute clown when I race. I wear the loudest clothes I possibly can – bright pink socks, clashing shorts and my day glow orange vest.”

This vest holds such significance. It is emblazoned with ‘Campaign against living miserably, CALM’. A vest for mental health. A vest that shows the reason Mike does this. It’s the vest that you wear when you are a member of a club you really don’t want to be in.

“I don’t care if I come first or last in any race I do. I set myself a goal of a time I would like to complete it in and if I hit that, great but if I don’t, I don’t but I’m not going to stop until I finish.”

I silently hear, ‘because I don’t want to let Trev down’. Through the whole chat it is so abundantly clear that from the first initial race and everything he has done since it’s all for his desperately missed friend. To raise money for him, to keep him alive and to show him how much he meant to him. He completes the races for Trev and for anyone else that may be feeling like Trev.

“When I did the Porthcawl Triathlon I started off bad – panicking during the swim by having too many people around me and not getting my stride, getting concussed during a swim will do that to you, – so I was already in a weird headspace that didn’t settle until I was in the running. I spoke to a Marshall who commented on my CALM vest and she said “My son found them and they really helped and now he’s back on track” no one prepares you for the emotional side of running these races – especially when you hear stuff like that – I cried and have cried a lot before, during and after these races. After completing my first Iron Man, I had a complete break-down. I was exhausted, emotionally and physically. I had been pushing myself to the absolute limit training for it and it just consumed me. Cardiff Half this year was my first race back I thought I felt ready for after my weird headspace. It was early on and I saw a guy wearing his CALM vest. He was me. He was me four years ago. He was struggling internally and physically, and I had to help him. I grabbed him and shouted in his face “I’m not letting someone wearing one of those vests struggling, let’s get you up this hill!” . I got him up the hill and upon reaching the top I said “You okay now? You gonna do this?” And he said he was all good and I ran on.”

I saw Mike during this race as I was on the side cheering people on with a big sign. He poked me, we exchanged elated ‘Heeeeeyyyyys’ and he was off.

“After I saw you, I got around the corner and I couldn’t hold down the tears and they didn’t let up. Thank fuck I was wearing sunglasses. I just couldn’t get my pace. I left that guy and I shouldn’t have left him. He was struggling, and I left him.”

“I finished the race and sat by the river and sobbed my heart out explaining the whole situation to my girlfriend.”

Throughout our entire talk he never stops gushing about the support from his girlfriend. He lights up whenever he mentions her, and you can see the admiration and the gratitude he has for her.

“I don’t think I have gotten through this year without her. Whenever I am stressed or down, she tells me to go running – putting any plans we may have on hold to make sure that I can have that time. She never hides from calling me on my bullshit, never afraid to say “Mike you’re behaving like a dick, you need to go for a run” I couldn’t be the person and athlete I am without that support from her. Running clears my head and makes me appreciate things through the clarity it brings.”

Mike posts dated photos throughout the year on Facebook and one post shows a picture of the sky. We all have those moments when we look up and see Mother Nature doing her glorious thing and we feel alive. In that moment we can feel the elements and appreciate that we are lucky enough to witness the beauty and that is what his fitness does for him. It reminds him that he is here, and he is alive, and he can see the world’s beauty and bask in it. I never wanted our chat to end but it had to with our throats hoarse from the talking and the emotional toll that was etched on Mike’s face. I am so grateful to him for sharing this story with me and with you. If I learned anything from it, it’s that we all need a friend that loves you as fiercely as Mike does Trev.