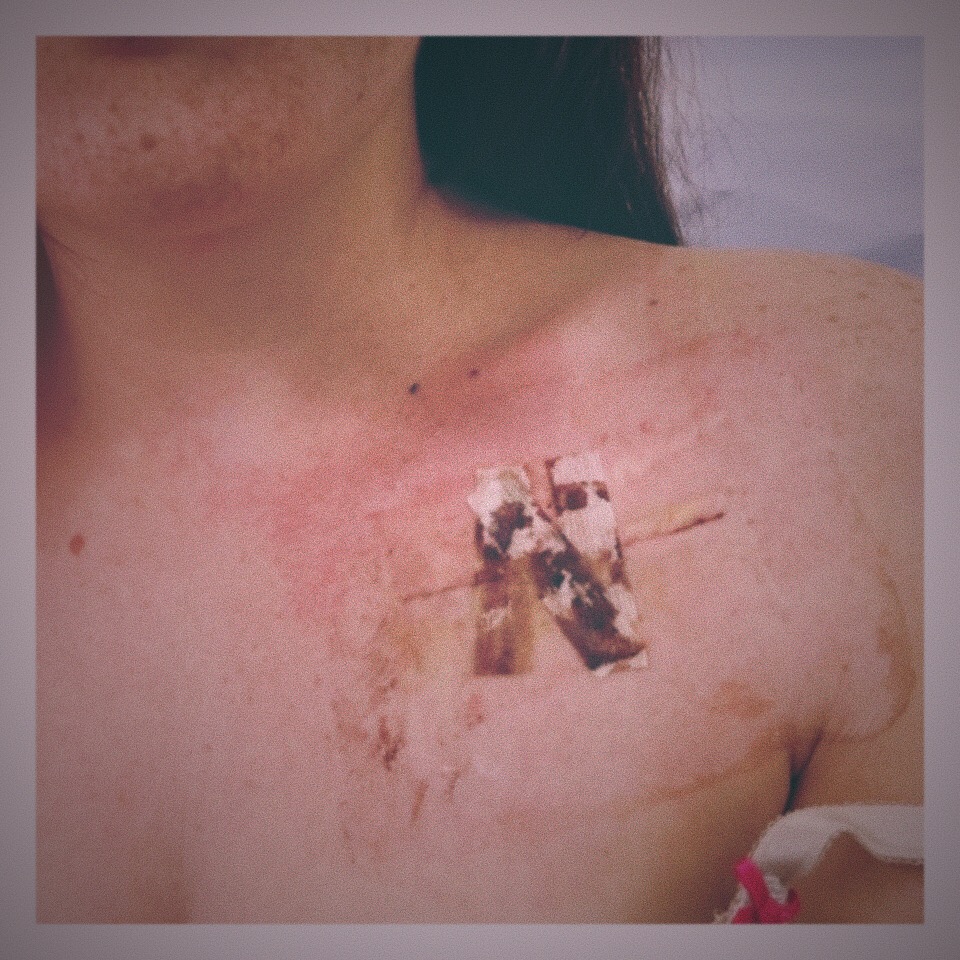 I was 17 when I got diagnosed with Long Q T syndrome and was told that I needed heart surgery. I remember being so baffled that I would require heart surgery – which naively – is reserved for old people and unhealthy people with high cholesterol and fatty arteries.

The day after my 6th form leavers ball I sat on my hospital bed with three other beds by me in the unit. One lady was in her 80’s and looked like she was dying, and the other two ladies were in their 60s and they both spoke welsh. To say I had never felt so frightened and isolated before was an understatement.

The first surgery was having an ICD inserted. The first insertion is always the most invasive as the electrical wires they need to feed down on to the actual heart is complicated. I went under general anaesthetic which is never a nice feeling and spent two more nights in hospital. I was poorly from the meds and threw up all over the place after drinking a Ribena and had to poo in one of those wheelchairs with a bed pan built in it. Pretty degrading for an 18-year-old luckily my boyfriend at the time fucked off on a lad’s holiday whilst I went through it all so at least he didn’t see me covered in spew and shitting by the side of my bed.
My sister-in-law read me Harry Potter and I spun out hard imagining the nurses turning into cats like McGonagall from all my morphine, but I quite liked it.

I spent a long time after that surgery accepting what had happened to me. Something completely shifted. I was no longer me, I had a huge scar and a massive chunk of protruding metal in my chest. I spent the summer covering up even when boiling and being completely socially awkward and paranoid.

With this machine and heart condition comes side effects and they are svt’s which are like giant panic attacks. My heart rate increases for whatever reason and because the pacing part of my machine kicks in it then has a fight with my natural rhythm which causes a heartbeat that is on par with a cardiac arrest. The symptoms start with me going a little spacey and vacant, to hyperventilating and basically choking as I cannot breathe, and my body feels like it is on fire. I can sometimes get myself to calm down with breathing in a bag and stripping my clothes off if I can get that much control but there have been times where it has made me collapse. I have had these svt’s in several embarrassing locations such as the top of the stairs which made me collapse down the stairs, in nightclubs, gigs, during theatre rehearsals, outside the school gates and every time it happens I honestly think I am going to die.

Two years ago today, I had my third round of surgery and had a new ICD fitted as they tend to get a bit better as the years go by. The surgery was horrendous. They had embedded my previous machine in my chest behind the muscle and my muscle had grown over it as it was a foreign body inside so when they removed the machine they ripped a lot of my muscle out and I am still suffering from muscle trauma. I have permanent pins and needles around my machine. I cannot lift my arm up fully without a shooting pain I cannot lay on my left side and the machine continuously pokes me in the armpit.

But – how lucky am I? My sister had the same condition and she died from it. I get to have all this surgery and all the checks up for free on the NHS and I get to live my life. I feel alone sometimes and there have been occasions that I have felt different. I have been treated unfairly because it is a hidden disability. I get self-conscious about my now three scars on my chest (they almost look like frenzied stab wounds) My immune system has gone to utter shit because of it and I think in my elderly years I won’t be one of those amazing people that still gallivant around with women’s guild making jam, I’ll be one of those withered oldies that looks already dead but I’m okay with that. On the day of my last surgery, my Mum visited me and wiped the sick off my chin after I threw up over myself again and then proceeded to French plait my hair so I didn’t look so much of a mess.

For now, I get to wake up in the mornings and cuddle the children that I was told it was to dangerous to have. I get to go on the rollercoasters that I’m told I’m not allowed to ride on. I get to swim in the oceans that I was told I really shouldn’t do anymore.

I will not let my disability define me. I’m owning it and living it.