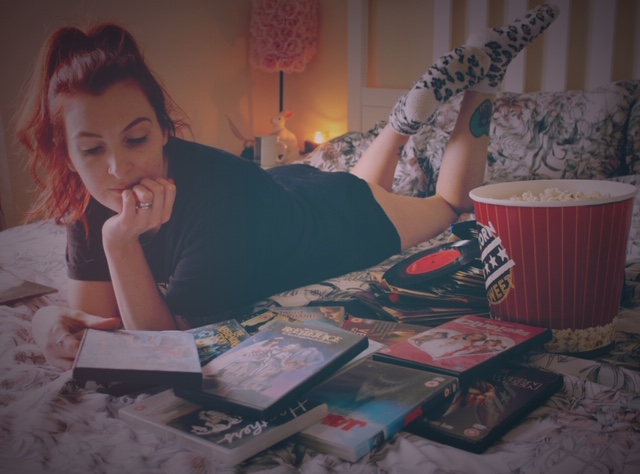 01 May My Top Ten favourite Movies

Posted at 20:10h in Blog by Nicki Smalley 0 Comments

When you stick on a movie you enter the wonderful escapism that can take you anywhere and give you all sorts of emotional ranges. I am a massive film buff and when I was a teen I felt like Dawson Leery and I were twins. Sure, he was a fictional character of the over the top teen drama Dawson’s Creek but he had a deep love and respect for movies that no one I knew had. His passion and love resonated deep within me. Coming up with this top ten was actually pretty tough. The first 4 were fine then trying to wittle it down to just ten was so SO hard. I managed it though so here they are.

1. Jaws
This masterpiece will forever be my number one. When I was little we had Jaws on VHS
that had been taped off the telly one Christmas (This sentence makes me feel old!) I always watched Jaws and I think the first time I saw it I was about 5 or 6. My parents sound a bit irresponsible, letting me watch a man get bitten in half by a giant shark but they didn’t let me watch Hocus Pocus because it had witches in it so swings and roundabouts. When I was 19 I snuggled up and watched a brand new DVD copy and it was then that I discovered I had missed the first 15 minutes of the movie. Our copy started when the police guard has found young Chrissie’s severed arm on the beach. It was like discovering a whole new world. No matter how much money people spend on getting the best CGI killer sharks now nothing will beat the original. Sure he looks fake but when you think it was made in the 70s it was completely revolutionary and that speech about the Indianapolis that Quint does makes me breathless every time. Also instead of giving me an irrational fear it just made me completely captivated with Sharks. If a movie that has been made in the 70s and people still quote it you know you struck gold.

2. What’s eating Gilbert Grape?
I was obsessed with Johnny Depp in the 90s (who wasn’t?) .I saw this film in my local video rental store one day and pleaded with my Dad to get it and god damn, this movie rendered me speechless. A simple story of a young man frustrated with his mundane life. Gilbert lives in a small town, and bares the weight of being the man of the house, dealing with his severely overweight mum and disabled brother. He meets a beautiful, free-spirited Becky and love blossoms. Simple, effective and heart breaking this is just magical. Also one of Leonardo DiCaprio’s finest performances.

3. Edward Scissorhands
If you can make it through this movie without shedding a single tear then you are dead inside. I feel this is Tim Burton at his absolute best. He plays on the horrors that is every day surburban middle America – Every house being the same, every car being the same. The bored house wives clucking at each other with faux gossip and he brings an outcast laden in liquid black to the colourful world below. Edward just wants to be loved and to belong but he doesn’t fit in and he never will. This simple story of someone being different and just wanting to be accepted is told in an unique way that captivates and makes you ache for Edward.

4. Labyrinth
I watched this movie at least twice a week when I was a kid and David Bowie is still my all time love. There’s more to this film than just the best soundtrack ever made, awesome puppets and Crotch watch. Sarah has this incredible arch over the movie going from a self-centred spoilt brat that refuses to grow up and relishes in her world of fairy stories and make believe to this bad ass sassy pants that puts others first, realises that its all junk and she has to save Toby. Even when faced with the most beautifully dressed ethereal Goblin King with his mullet blowing in the wind and his grand pearly white coture – she stands tall. He seductively tells her she can have everything she has ever wanted and still she refutes. That takes so much power. I definitely would’ve gone straight to the castle with him and lived as his slave forever.

5. The Never ending story
I developed a huge fear of wolves from watching this movie. The scene when Atreyu comes face to face with Gmork who is a servant to the power behind The Nothing I would cower behind a cushion, my brother, my sandwich – whatever was around. That is one scary ass wolf. I read all the time when I was little much to the dismay of my brother and sister. I felt I was Bastian Bux – picked on for being a bit weird with my head constantly stuck in a book. You become so invested in the mini warrior Atreyu becoming the one to save the world of Fantasia from The Nothing. It’s a proper adventure movie that kids will still love. It has everything you need. Excitement, danger, humour but lets not discuss Artax in the swamp of sadness, I’m still not over it.

6. Empire Records
If you haven’t heard of this movie don’t be fooled in to thinking that this is just some weird shit movie that no one but me likes. Released in 1995 this movie has phenomenal cultural status. So much so that on April 8th every year the internet still declares it’s Rex Manning Day. So the premise of this comedy drama movie is you watch what happens in one exceptional day at an independent record store. (You know that place where you would buy vinyls, cds and cassettes and have actual human interaction in an actual building) On this particular day a pompous, washed up 80s star Rex Manning is coming to do a signing in store. Loads of shit goes down over the course of the day some if it hilarious, some of it frustrating, some of it touching. You all just want the corporates that are trying to take over to get screwed over. You want AJ to get the girl, you want Joe to get the money and you really want Marc to get a band. It has a killer soundtrack. It teaches you valuable life lessons. It is quirky and unique and either love it or hate it. Damn the man, save the empire.

7. ET
ET getting drunk in a flannel shirt when he’s home alone is reason enough to watch this movie. A story of Elliot, a boy that befriends an extra terrestrial being who he names E.T., helping to keep this gentle creature a secret from those who want to capture and experiment on him. This will give you all the feels, from the mega cuteness of E.T. and teeny Drew Barrymore as Gertie to the gut wrenching river scene. I blub like a baby throughout this movie.

8. Halloween
Still my favourite horror movie to date. A good old slasher movie from the 70’s is horror done right. I’m not so fond of over the top killings and all the blood and guts. This movie terrifies more than any others. The sharp notes from the orchestra perfectly timed with the haunting steps of Michael Myers chills me every time. When Laurie is in the cupboard I always hold my breath, praying he won’t find her. The deaths are simplistic for a horror movie keeping it low key with regular strangulations and stabbings but that petrifies me because its controlled and calm not frenzied and unrealistic like you get in horrors now. This is still held in high regards as one the greatest horrors of all time so you shouldn’t argue with the experts.

9. How to make an American Quilt
I have no idea how many people have seen or heard of this movie but I bloody love it. Starring my main bae Winona Ryder its a story of Finn who goes to stay at her grandmother and great Aunts house to finish her thesis and think about her boyfriend’s engagement proposal. Finn discovers that they have a quilting bee and they are currently making a quilt for her to receive on her wedding day and the theme is where love resides. You hear all the different stories of the bee members as it explains the deigns of the quilt and you follow Finn’s own struggles with choosing which path to take. Sometimes all you need is an easy watch that makes you a little bit sad then raises you up with some good old fashioned romance.

10. Beauty and The Beast
Getting the real VHS copy of Beauty and the Beast for Christmas one year is still one of my most favourite and memorable presents. I’m not sure how many of you will remember but back in the day Disney only released their movies on to VHS for a limited time and they were £25. We didn’t have a heap of money growing up so I appreciated this more than I can express. Again, a story of someone who prefers to read and learn than do what is expected of them, Belle is still my favourite Disney Princess. If you think about it too hard it is a bit gross that she is in to an actual beast but if you stick with the story of it’s beneath the surface and what’s inside that counts then its okay and he’s only a beast because of the curse so that’s okay right? Also, Queen Angela Lansbury is the voice of Mrs Potts and that alone makes this movie utter perfection.

So that’s my top ten. I know that every person is different so I would love to hear what your favourite movies are and why. Either leave me a commet here or on social media and let me know babes x