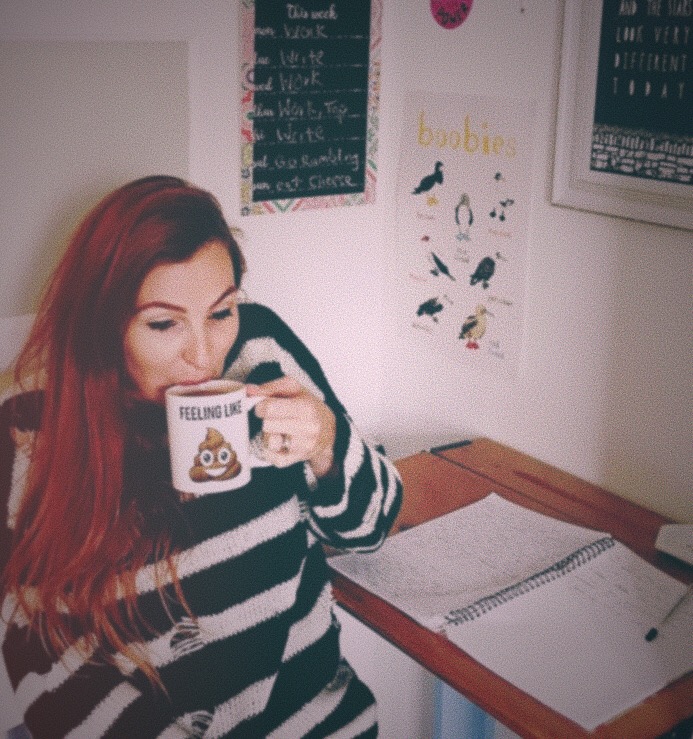 High school was hard for me. Aside from all the usual crap that you go through i.e. girls being bitches, periods, spending the day crying, raging or melancholic because of those bloody hormonal imbalances there was one thing that kept happening to me over and over again that has traumatised me for life.

The absolute horror of the P.E. lesson shook me to my very core. I was awkward and desperate to be liked so I was a bit try-hard which made me weird. I was also very, very shit at sport. Every.single.sport. Due to my butter fingers, inability to run fast or just normally instead of like Phoebe in that episode of Friends or just general shitty co-ordination I was never picked for the team, I was always left standing with the “losers” (seriously, high school, you suck) never quite realising I was one of them. There was a girl who thought she was “so lush” (she wasn’t) but she was very, very good at netball and was on the school team and much to her dismay she landed little ol’ me when we were playing basketball one day. After a lot of dirty looks and “How did I get stuck with that stupid bitch” et al comments the game started. This lesson played out like a frigging movie.

There wasn’t much time left – mere minutes – we were sweaty, drained but desperate. One basket was all we needed to win. One little basket. I was down the end being basket defender or whatever and I was probably biting my nails or thinking about lunch and out of the corner of my eye I saw the ball revolving towards me in slow motion and for some reason I put my hands up. I am a dropper, what the hell was I thinking? Well, I only bloody caught it and I had a split second decision to make I heard “PASS IT HERE NOW, BITCH” and I heard a little voice in my head say “launch it”

Adrenaline was passing through my veins I heard “what the fuck did you do that for?” but then I saw the ball GO IN THE BLOODY BASKET! And then the whistle blew. See, actual movie scene right there. It was a fluke, we all know that, but I did it, I fully nailed it. What was the most beautiful part of that moment? No one would ever think that I would do that. They wouldn’t be surprised if Mouthy girl did it but me – what a bloody shock! Huzzah for the underdog.

The elation was short lived when next P.E. lesson I was still a consolation to the team rather than picked. It sounds ridiculous but that feeling of ‘you don’t pick me, you settle for me’ hasn’t really left. My sister was wild and care free and so goddamn popular. She decided to work in America by herself at 19 and when it didn’t work out she came home then moved to Leeds and just before she died she had got a job in London and was going to move there just to try something new. I could never be like that. I’m a bloody scaredy cat and my anxiety eats me for breakfast. I have many grand ideas that never amalgamate because of ‘the fear’. My brother was always neat and tidy, a really hard worker and good with money. When faced with becoming a Dad at 18 he worked his bollocks off in really shitty jobs just to provide and then followed my father’s footsteps and joined the Police force. I didn’t get accepted to the Police force. I also got turned down for a million jobs in London as I wanted to work in the theatre after Drama College. My brother and sister seemed to get an idea and make it happen whereas I haven’t really amounted to much at all.

It feels like I get pipped at the post through most things. If you have watched Big Fish by Tim Burton I am the female equivalent of Don Price constantly on the side-lines watching Edward Bloom get everything that I want with the greatest of ease.
I got a C in Drama A level everyone else got B’s
I applied for supervisor in a job- the new guy got it
After weeks of tap lessons years ago I nailed the 5 beat ball riff- my best friend knocked out a 6 beat.

The same friend was always the attractive one of our twosome. The amount of times I was the approachable girl the guys could chat to as a way to get to my hot mate is unfathomable. Every single time we hit the club I would have lots of attention from super-hot guys and after chatting for a while they would be like “so, your mates hot! Is she single?” It felt reaaaaaaaaaaaaly good. I was the uglier friend, the fatter friend, the sensible one. Always the superfluous spare.

But through all of this something wonderful has blossomed for me. Like way back in the great basketball game of 1998, no one expects great things from me so when I do great things it’s even better. I have no pressure on me to be good at everything or anything so people get surprised when I come up with the goods. I’m the understated warrior of greatness and if I mess it up its okay because people kind of expect me too anyway. It’s a win-win.

My greatest achievements are as follows:-

My Kids- Some people may groan or think anyone can have kids but my kids shit all over your kids. They are fucking cool. They are polite and creative and open and loving and weird and I love it. I let them know that all this stuff is fake news. As long as the try their hardest at whatever they are doing the outcome doesn’t matter to me. I don’t care if they get 12 A*s as long as they try to their utmost capability. I even love them after saying that the first time my husband ever made a curry, it was the best curry they have ever had, even better than mine.

A hot guy with a really cocky attitude that I met in 2005 said to me that my hot friend wasn’t that hot and he couldn’t see what all the fuss was about. He’s still married to me.

I am really good at selling useless crap on EBay

I passed my driving theory and practical test first time.

I gave up smoking cold turkey.

I swam with a 14 foot Great white shark.

I Tap danced with actual Adam Garcia and he laughed at my jokes.

There will always be someone better but most of those people that made me feel that way aren’t in my life now. I don’t want toxic people around me that are happy letting me know that I am a resort, a booby prize, the diet coke. They ain’t worth a shred of my time. My friends in my life balance me out. They are better at me in most things but none of them can do the triple time step. They don’t expect incredible things from me because they already think I am incredible. They will give me the same amount of love and praise if I got a book published to if I managed to hold in a fart in in the cinema. It doesn’t matter if you are the best at everything. It doesn’t matter if someone skinnier or prettier gets the guy. You will achieve great things through your life without the constant pressure.

I’m tired of trying to impress people and to jazz up my life story. I’m married with two kids and I’m a receptionist. That’s pretty much it. I’m not destined for greatness. I’m not going to save the world. I’m not going to earn big bucks but I am going retain pointless animal facts that I just drop into conversation for no reason at all. I am going to annoy you with the fact that I can relate everything to Harry Potter. You can keep your awesome jobs or the fact that you own your own home while I still rent. You can keep your sporty kids that win trophies and your size 8 physique. I have spaghetti arms, I have no savings and most of my pants have holes in them. I am alright with this. A girl that had a really pointless vendetta against me once wrote on a club’s toilet wall (she was in her twenties when she did this, just saying) “Nicki T. Second choice is never best” Well, I would rather be this than perfect.